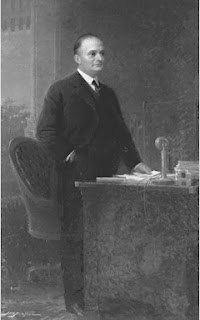 TOWNSHIP OF SPRINGWATER, Ontario, March 24, 2011 /Canada NewsWire/ - Today, the Ontario Heritage Trust unveiled a marker commemorating the gravesite of the Honourable Ernest Charles Drury, Premier of Ontario from 1919 to 1923.

"Ernest Charles Drury devoted much of his career to improving the quality of life in the province's rural areas," said Dr. Thomas H.B. Symons, Chairman of the Ontario Heritage Trust. "We are proud to commemorate his place in our history with this gravesite marker."

Born in Simcoe County in 1878, Ernest C. Drury was Ontario's eighth premier. He was a leader in the farming community, and became the first president of the United Farmers of Ontario in 1914. The group became a political party in 1918 and won the election of 1919. Drury was then asked to form a government. Known as the "Farmer Premier," Drury enacted progressive legislation that improved life in rural jurisdictions, and began an ambitious road-building program. Drury retired from provincial politics in 1923.

"Through advanced social programming and expansion of the province's road network, Premier Drury gave a voice to rural Ontario," said Minister of Tourism and Culture Michael Chan. "He is remembered for his significant contributions to his community and to his province."

The Premiers' Gravesites Program honours Ontario's former premiers and their service to Ontario by marking their gravesites. Specially designed bronze markers inscribed with the individual premier's name and dates of service are installed at each gravesite, along with flagpoles flying the Ontario flag, where possible.

This program is administered by the Ontario Heritage Trust with funding support from the Government of Ontario. The Trust is an agency of the government dedicated to identifying, preserving, protecting and promoting Ontario's heritage for the benefit of present and future generations.

Eighteen premiers will be commemorated through the Premiers' Gravesites Program. This is the 13th marker to be unveiled through the program since it began in 2008. View them all at Ontarioplaques.com

For more information on the Premiers' Gravesites Program, visit www.heritagetrust.on.ca.