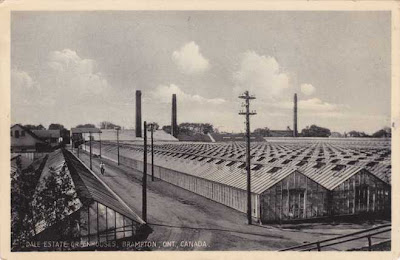 BRAMPTON, Ontario, September 12, 2012 /Canada NewsWire/ - Today, the Ontario Heritage Trust, the City of Brampton and Friends of the Dale Estate unveiled a provincial plaque to commemorate the Dale Estate.

"The Dale Estate began the greenhouse industry in Peel Region and encouraged the industry's growth. It created many jobs, gave Brampton status in the global market and strengthened the community's economic viability. The Dale Estate forms an important part of Brampton's heritage, and I am pleased to be able to commemorate their history in the Flower City." - Michael Chan, Minister of Tourism, Culture and Sport

"The Ontario Heritage Trust is delighted to celebrate Brampton's floriculture heritage. The Dale Estate is a remarkable story, a business that started with Edward Dale's home garden and, at its peak, produced millions of flowers for admirers around the globe. The Dale Estate and its flowers were world-renowned and encouraged the growth, prosperity and fame of the City of Brampton." - Thomas H.B. Symons, Chairman of the Ontario Heritage Trust

The unveiling took place at the Rose Theatre Brampton in Brampton, Ontario.

The Dale Estate The Dale Estate nurseries played an instrumental role in the development of Brampton, establishing its reputation as "The Flower Town of Canada." The business began in 1863 with its founder Edward Dale selling vegetables from his garden and it soon expanded to include the cultivation of greenhouse roses. By the early 20th century, the Dale Estate employed a quarter of Brampton's population and was among the largest greenhouse flower producers in the world. International success stemmed, in part, from the production of new varieties of roses and orchids, and from the famous "Autographed Rose" technique. The Dale Estate continued to prosper through the first half of the 20th century and its numerous greenhouses and great chimney became iconic features of the local community. In the 1960s, the Dale Estate was sold and merged with another local grower, becoming the Calvert-Dale Estates. Gradually, production slowed and the firm closed its doors in 1980.

"For over 100 years, the family-run Dale Estate blossomed with international recognition for Brampton. Significant to our Flowertown heritage, the Dale Estate was one of the largest growers in the world and their roses renowned. Brampton - Canada's Flower City - is proud to celebrate the Dale Estate's history of success and distinction as inspiration for our city's future." - Susan Fennell, Mayor, City of Brampton

"The Dale Estate, once the third-largest greenhouse operation in the world, sold world-renowned roses and assorted flowers for over a century. It gave rise to Brampton's reputation as "The Flower Town of Canada" and dominated the fabric of life in the small town. Today, this floral heritage continues in Brampton's annual Flower Festival, corporate logo, beautiful parks and branding as the Flower City. By this plaque, we commemorate that great floral giant, the Dale Estate, and its founder, Harry Dale, whose love of roses put the small town of Brampton on the worldwide stage." - Dale O'Hara, author of Acres of Glass and member of Friends of The Dale Estate

The provincial plaque will be permanently installed in Duggan Park - near the intersection of Vodden Street East and Centre Street North - in Brampton.

The Ontario Heritage Trust is an agency of the Government of Ontario dedicated to identifying, preserving, protecting and promoting Ontario's heritage.