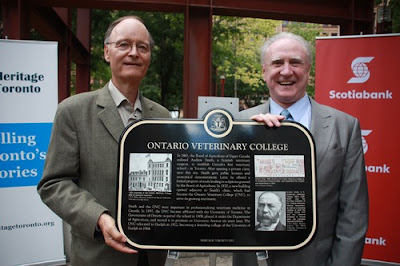 Dr. Alan Meek, left, and Dr. John Reeve-Newson worked with
Heritage Toronto to commission a plaque marking
the original site of the OVC on Temperance Street in Toronto.

GUELPH Ontario - September 10, 2012 - University of Guelph News - The Ontario Veterinary College (OVC) celebrated its Toronto roots on Sunday with the unveiling of a heritage plaque to mark the original site of the college on Temperance Street.

About 70 people, including 35 descendants of OVC founder Andrew Smith, attended the event organized by Dr. Alan Meek, former OVC dean, and Dr. John Reeve-Newson, an OVC ’64 graduate who has practiced in the Toronto area for more than 40 years.

Ross Fair, a Ryerson history professor and member of the Heritage Toronto board, thanked Meek and Reeve-Newson for the countless hours of volunteer effort involved in initiating and fundraising for the project.

“Without them, we would not be here today celebrating this important part of Toronto’s history,” Fair said.

Smith established the Upper Canada Veterinary School in 1862. The name changed to Ontario Veterinary College in 1869 and after years of expansion on Temperance Street, OVC moved to University Avenue in 1915. It was relocated to Guelph in 1922. OVC was affiliated with the University of Toronto from 1897 to 1964, when it became one of the founding colleges of the University of Guelph.

“For some time, I’ve thought it odd that there was nothing on Temperance Street to mark the spot where OVC was established,” Meek said. “The college’s 150th anniversary gave Dr. Reeve-Newson and I the incentive to remedy the situation with a lot of help from our friends.”

On the site of what is now an underground parking garage next to a tiny green oasis called Cloud Gardens, in the shadows of the 68-storey Scotia Plaza and 70-storey Trump International Hotel and Tower, Fair asked the crowd to imagine the sites and sounds and smells of the city 150 years ago.

Back then, Toronto’s economy relied on the health of horses that were “vital to people’s ability to work and travel in the old city,” he said.

Reeve-Newson thanked Heritage Toronto and sponsors of the project including Veterinary Purchasing Ltd., Lifelearn, Scotiabank, the Ontario Veterinary Medical Association as well as many individual donors. He also acknowledged the descendants of Smith at the unveiling, including great-great-granddaughter Dr. Angela Whelan OVC ’90 and her family.

“You have an ancestor to be very proud of, and we’re proud to honour him,” Reeve-Newson said.

Other guests at the event included Stephen Samaroo of Scotiabank, University of Guelph vice-president (research) Kevin Hall, and Grant Crack, parliamentary secretary to Ontario Minister of Agriculture, Food and Rural Affairs. On behalf of the minister, Crack presented a special certificate to Dr. Elizabeth Stone, OVC dean, in honour of the college’s 150th anniversary.

Meek said there was much more to the project than fundraising and working with Heritage Toronto to design a plaque. The Ontario Genealogical Society helped track down additional Smith descendants, including great-great-grandson Jeff Smith, who is working with OVC’s Dr. Peter Conlon to complete the Smith family tree. The group has also combed through city and provincial archives in search of photographs and artifacts from OVC’s first 60 years. The hunt is still on for a quality photograph of the original Temperance Street building, which was demolished in 1924.

Smith and the OVC played a vital role in professionalizing veterinary medicine in North America. By the time the Ontario government took over in 1908, the college had graduated more than 3,000 veterinarians.

Smith had a lifelong love of horses and was recognized as an expert on equine diseases, according to a citation from the archives of Mount Pleasant Cemetery, where he was buried in 1910. He was a founding member of the Ontario Jockey Club, now known as the Woodbine Entertainment Group, and he established the Industrial Exhibition in Toronto, renamed the Canadian National Exhibition in 1912.