How Should the Great War be Remembered? 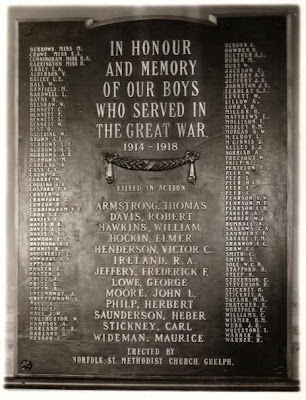 OTTAWA, December 6, 2012 /Canada News Wire/ - 2014 marks the 100th Anniversary of the start of the First World War. It was the world's first global conflict and it affected every level of society. Over 500 high school students from Victoria High School are remembered in the Great War Roll of Honour; the first woman officially in the Royal Canadian Navy was a 'nursing sister' from Bruce County, Ontario named Elizabeth Pierce; 700 men from the Newfoundland regiment were killed or injured during the First World War and children across Canada saved their pennies to buy War Savings Stamps.

Cenotaphs in tribute to these sons, daughters, men and women exist in virtually every city and town across the country yet only 2 in 10 Canadians attend annual Remembrance Day events in their communities. Teachers and community groups are now seizing upon the centennial anniversary to renew interest about Canada's role during the Great War and make the distant past more relevant for Canadian students.

Canada's History Forum will bring together over 150 of Canada's leading educators, students, community leaders, historians and museum curators to join with the Governor General's History Award recipients and critically examine leading practices inside the classroom and in community commemorations. The theme of this year's 5th national history forum is 'How should World War I be remembered?" As the First World War fades from public memory, efforts as to how to preserve the world's first global conflict as a vibrant part of the Canadian historical and cultural landscape will be explored.

"The National History Forum plays an important role in fostering a greater connection between the history students learn in school, and the presentation and commemoration of it in our communities. By hosting this annual opportunity to bring teachers, museums, and content creators together we spark new ideas and partnerships that will lead to the research and telling of even more of Canada's stories."

Some of this year's presenters include Jonathan Vance, who will discuss how Canadian remembrance of this event has changed over time, and Andrew Iarocci who will talk about the myths that surround Canada's involvement in the war. Melanie Martin, Department of Tourism, Culture & Recreation, Government of Newfoundland, will discuss the curriculum program and memorial projects under development in Newfoundland to commemorate their role in the Great War; and Dean Oliver, Director of Research, Interpretation and Exhibition at the Canadian War Museum will discuss new research and findings that address aspects of wartime Canada about which we still know very little.

An initiative of Canada's National History Society, produced with the support of the Department of Canadian Heritage and Enbridge Inc., the Forum will also feature a special presentation of the National Winners of the Heritage Fairs-Young Citizens student video project over the lunch hour.

This year's event will feature three sessions of an hour and a half in length and are structured to encourage questions and dialogue with the audience. The event will be held in Ottawa at the Canadian War Museum, 1 Vimy Place. It is open to the public and free of charge to attend. The presentations will also be broadcast live online. To register for the National Forum on Canadian History, and to preview podcasts with our Forum presenters visit the education section of www.CanadasHistory.ca

Canada's History Society is a national charitable organization devoted to popularizing Canadian history. In addition to presenting the Governor General's History Awards and publishing Canada's History (formerly The Beaver) magazine, as well as Kayak: Canada's History Magazine for Kids, the Society also produces a number of educational and online programs to encourage more discovery, celebration, and understanding about our rich history and culture. More details can be found at www.CanadasHistory.ca.