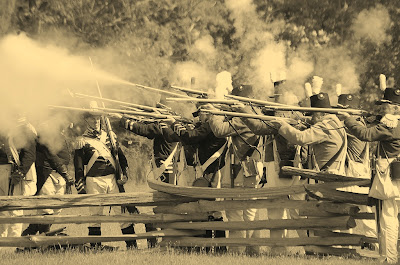 The founder of this family in Canada was Charles Roszel, who came from New York State about 1800, and settled on a farm on the Sixteen road in Gainsboro Twp., about two miles from Smithsville, where some of the descendants still live. (1906)

Five of his sons served in the war of 1812, and were in General Brock’s command, but escaped without wounds.

Nathaniel, Eldrich and George were given grants in Erin Twp. for their services, getting 100 acres each on payment of $26 to defray expenses of deeds etc.

George and Nathaniel were to receive lot 2, con. 6, but the deeds by mistake were drawn for lot 1, con. 7.

In November 1820 George and Nathaniel came to Erin Twp., but George did not like the country, so sold his 100 acres, east half, lot 1, con. 7, to Nathaniel, who stayed there. The journey was a hard one, as they had to cut their way in from Georgetown, and the difficulties of the trip can be judged by the fact that the path they cut to their locations was nine miles in length, and the journey now is made in six. They brought horses with them, but finding them of little service, Nathaniel sent his home with George, and they were returned to him later; these were probably the first horses in the township.

Eldrich Roszel came to Erin Twp. in the spring of 1821, and settled on his grant, the west half, lot 2, con. 7. Nathaniel was born on July 3, 1878 and came with his parents to Gainsboro Twp.

He served in the war of 1812, and was in the battles of Queenston Heights, and Lundy’s Lane, where he waded through blood to his shoe tops.

In the fall of 1820 he settled on the land grant which he received for his services. He was the first settler in the township of Erin. He used to clear 8 acresof land every winter, and was conscientious and a hard worker. In the early days he took his grist to Jones’ mill on the sixth line of Esquesing Twp.

He was a Methodist, and his house was headquarters for the ministers in the early days, and he gave ground for the church and cemetery. He was a Reformer in politics, and in the first elections, went all the way to Palermo to vote the freehold ticket.

George was born in 1832, occupies a part of the homestead. He married Alice Vanatter of Erin Twp. Issue: Mrs. E. Hilts, Norval; Sarah who died at the age of 24 years, Mrs. Comfort Thompson, Hiram and Elijah who died in infancy, Mrs. Robert Wood, and Ira, Erin Twp.

Benjamin Roszel, who was the first white child b. in Wellington County., was born in Erin Twp., in 1821, on lot 1, con. 6, and practically passed his life in that Twp. He never sought or held municipal office, and was very much respected.

He was a member of the Methodist church, and a Liberal in politics.

George A. was born and brought up in Erin Twp. He owns 150 acres, lot 23, con. 7, Eramosa Twp., upon which he resides, and also 50 acres, lot 21, Erin Twp. He carries on mixed farming, and has acquired his property by his own exertions.