Canadian Government Invests in War of 1812 Commemorations in New Brunswick 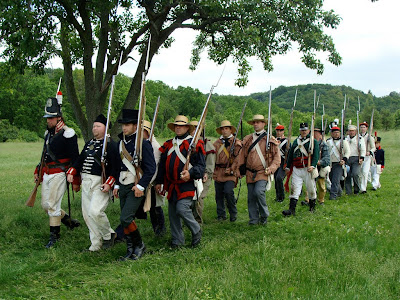 FREDERICTON, New Brunswick October 5, 2012 /Canada NewsWire/ - An investment from the Government of Canada will enable the people of New Brunswick to commemorate the 200th anniversary of the War of 1812. Support for The St. John River Society was announced today by the Honourable Keith Ashfield, Minister of Fisheries and Oceans, Minister for the Atlantic Gateway and Member of Parliament (Fredericton), on behalf of the Honourable James Moore, Minister of Canadian Heritage and Official Languages.

The St. John River Society will commemorate the involvement of New Brunswick in the War of 1812. One of the activities will include a re-enactment of the March of the 104th Regiment of Foot. During the War, this Regiment marched more than 1,100 kilometres from Fredericton to Kingston, Ontario, to reinforce British troops and thwart an expected invasion by the Americans. This effort by a regiment of poorly clothed, frostbitten, and hungry soldiers stands as an incredible feat in military history.

"This year marks the start of the five-year countdown to Canada's 150th birthday in 2017," said Minister Moore. "Our Government is proud to invest in projects that contribute to our collective identity and define who we are as Canadians. On the road to 2017, let us continue to celebrate all of the things that make Canada the united, prosperous and free country we are today."

"Because of our Government's investment in The St. John River Society, our community, tourists and Canadians will learn about the important role played by New Brunswick—and specifically the March of the 104th Regiment of Foot—during the War of 1812," said Minister Ashfield. "The commemorative activities planned for the next three years are an exciting opportunity to remember our ancestors' contributions that helped pave the way to the independent nation we live in today."

"Thanks to the funding received from the Government of Canada, The St. John River Society will be able to play a key role in marking the Bicentennial of the War of 1812 in New Brunswick," said Wanda Hughes, President of the Society. "New Brunswick has an important piece to contribute to the national narrative of this war. Through this project, The St. John River Society and its partners will ensure that this incredible story gets its just due on the national stage."

The St. John River Society is a not-for-profit organization that is acting as a regional coordinator for War of 1812 commemorative activities in New Brunswick. In 2011-2012, the Society received funding of $142,060 through the 1812 Commemoration Fund for research, planning and coordination of the re-enactment of the March of 104th Regiment of Foot and associated school and community commemorative activities.

The Government of Canada has provided additional funding totalling $435,000 ($335,000 for 2012-2013 and $100,000 for 2013-2014) through Canadian Heritage's 1812 Commemoration Fund. The Fund supports community-based projects to foster greater awareness and understanding of the importance of this conflict.