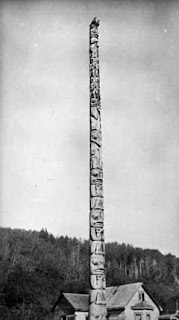 LAXGALTS'AP, British Columbia, May 11, 2011 /Canada NewsWire/ - Hli Goothl Wilp-Adokshl Nisga'a, the Nisga'a Museum, opens today in a dedication ceremony for Nisga'a people, dignitaries, and special guests. Opening on the 11th anniversary of the Nisga'a Final Agreement, the museum is the permanent home of the Ancestors' Collection—over 300 Nisga'a artifacts that have been repatriated through British Columbia's first modern treaty.

"Our scattered legacy has come home," explains Mitchell Stevens, president of Nisga'a Lisims Government. "These treasures connect us directly to this place and yet tell stories with universal themes. I invite everyone to come up and have a look for themselves. You will be moved by the power and spirit encountered here."

Hli Goothl Wilp-Adokshl Nisga'a means "The Heart of Nisga'a House Crests," a name that celebrates the importance of Nisga'a tribes and tribal crests in Nisga'a society. With a design inspired by traditional Nisga'a longhouses, feast dishes, and canoes, the 10,000 sq. ft. facility contains exquisitely carved masks, bentwood boxes, headdresses, and soul catchers acquired from the Nass Valley during the late 19th and early 20th centuries. At that time of radical change, many Nisga'a possessions were destroyed; others were acquired by outsiders and eventually sold to museums. Now, for the first time, these Nisga'a treasures are displayed together in their place of origin.

"The development of the world-renowned art style that typifies the First Nations of the north coast of British Columbia and Southeast Alaska had its origins at the mouth of the Nass River," explains George MacDonald, Director Emeritus, Canadian Museum of Civilization. "The Nisga'a Museum houses one of the finest collections of Northwest Coast aboriginal art in existence. It will attract international attention and redraw the map of cultural tourism in British Columbia."

Hli Goothl Wilp-Adokshl Nisga'a continues to evolve. Future exhibits will take visitors from the Ancestors' Collection to the recent struggles for Nisga'a territory and self-government, to modern Nisga'a life on the land, river, and sea. The museum will be open to the public on an interim basis to the end of June. During July and August, opening hours will be 9 a.m. to 5 p.m., seven days a week. Group tours can be arranged in advance. Please check the website for details ( www.nisgaamuseum.ca).

"This is a proud day," declares President Stevens. "Our ancestors' treasures are back where they belong, housed in a place of honour. Hli Goothl Wilp-Adokshl Nisga'a is our gift to each other, our fellow Canadians, and all humanity."