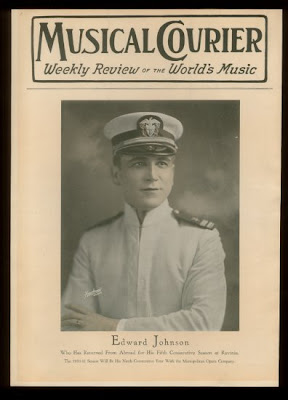 recorded on November 6, 1919 in Camden, New Jersey by Victor Recording

If you don't have a Wurlitzer handy, the National Jukebox website is the next best thing. Actually, it's probably the "first-best" thing, as it contains over 10,000 recordings made by the Victor Talking Machine Company between 1901 and 1925.

It is a tremendous endeavor, and one that brings the sounds of another era into the life of anyone with an Internet connection.

First-time visitors should click on the "Making the Jukebox" to get started. Here they can view a slide show of Library of Congress staffers at work selecting the items to be digitized and other shots documenting the entire process.

Next, visitors can listen to the "Playlists of Recordings", which feature playlists compiled by Library of Congress curators and project partners. Currently they include "Early Tin Pan Alley", "The Fox Trot", and "Songs by Irving Berlin".

The interactive "Victrola Book of the Opera" from 1919 is quite a pip, and visitors can use it to read stories of great operas while listening to period recordings. Also, it's a good idea to read up in the "How'd They Do That?" section, found toward the bottom of the homepage,
for more behind the scenes information on the project. [KMG]

More About the National Jukebox