The United Church of Canada’s Toronto Archives Is Moving 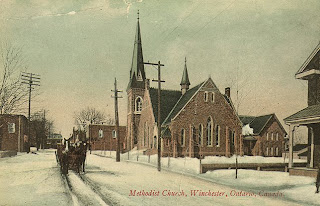 TORONTO - March 6, 2013 - The United Church of Canada announced today that its Toronto-based archives will be moving this summer from its current location at the United Church’s national office in west-end Toronto to the Toronto Christian Resource Centre in the Regent Park neighbourhood of downtown Toronto.

In announcing the decision on the new location for the archives, Nora Sanders, General Secretary of the General Council, said, “I am pleased that this move will mean not only that we will be saving a considerable amount of money but also that as a tenant we will be financially supporting a local United Church ministry.”

Sanders says that in addition to being able to house the United Church’s archival collection now located at the General Council Office at 3250 Bloor Street West in Toronto, the new location at 40 Oak Street offers more than enough space to accommodate records that are currently stored off-site at an archival facility.

She explains the decision to move the archives ahead of the anticipated relocation of the General Council Office to Bloor Street United Church in 2018 was an opportunity that made financial sense for all parties to the five-year lease agreement.

The United Church of Canada supports a network of archives situated in eight different locations throughout Canada. The archives in Toronto manages the records of the General Council and the Central Ontario Conference records of Bay of Quinte, London, Hamilton, Manitou, and Toronto Conferences and their respective presbyteries and pastoral charges. The church’s archives outside of Ontario are not affected by the move.

The United Church’s Toronto archives moved to its current location in 2008, after more than 50 years on the campus of the University of Toronto’s Victoria University. No decision has been made about whether the Archives will move again when the General Council Office relocates to Bloor Street United Church.

Nichole Vonk, General Council Archivist, will oversee the monumental task of moving close to 20,000 boxes of records to the new site. The church will be contracting specialized movers, the new location will meet the institutional standards set by the Canadian Council of Archives, and all the records will continue to be administered by professional staff.

Although not located directly on a subway line, the Archives’ new location at 40 Oak Street is easily accessible by public transit, will have on-site parking, and is closer to the United Church’s theological school at the University of Toronto.

While planning and preparations are underway to move the collection from its current location,

...the Archives will remain open during regular public hours until June 6, 2013.

...the Archives will not receive any records deposits after April 30, 2013. Records can be donated to the Archives when it reopens in September 2013.

...the Archives will continue to provide reference service for certificates or legal requests while it is closed to the public.

Vonk emphasizes that, throughout the transition, the church remains committed to providing continued uninterrupted, open access to its archival records related to residential schools for the purposes of the Truth and Reconciliation Commission.

For up-to-date information about The United Church of Canada’s archival programs and on the move, see the Archives webpage. Questions and concerns about the move should be directed to Nichole Vonk, General Council Archivist.