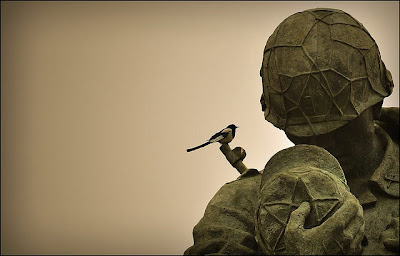 OTTAWA, February 7, 2013 /Canada NewsWire/ - Senator Yonah Martin, on behalf of the Honourable Steven Blaney, Minister of Veterans Affairs, Russell Mills, Chair of the National Capital Commission, and Jean-François Trépanier, Chief Executive Officer of the National Capital Commission, honoured the service and sacrifice of Canadian Veterans who served during the Korean War by illuminating a special ice sculpture tonight as part of Winterlude 2013. The ice sculpture commemorates 2013 as the Year of the Korean War Veteran, which was announced last month by Minister Blaney.

"The Korean War was one of Canada's most significant military engagements of the 20th century," said Minister Blaney. "Our Government is proud to honour the contributions of the more than 26,000 Canadian men and women who served during the Korean War, by making 2013 the year of the Korean War Veteran. We must never forget the ultimate sacrifice made by 516 Canadians that never returned home"

The 2013 Winterlude ice sculpture includes a replica of the Statue of Brothers, a symbol of the Korean War, at the War Memorial of Korea in Seoul. The sculpture depicts a scene where a family's older brother, a Republic of Korea officer, and his younger brother, a North Korean soldier, meet in a battlefield and express reconciliation, love and forgiveness. The crack in the dome stands for the division of Korea and the hope for reunification. The sculpture also includes a Canadian soldier standing nearby to witness the reconciliation.

"We are forever grateful to the men and women who served our country during the Korean War to preserve global peace and protect fundamental human rights," said Senator Yonah Martin. "Today, during Winterlude 2013, we illuminate this sculpture in their honour, so that everyone will remember their service and the sacrifices they made to help those who were in need."

The ice sculpture is located at the Crystal Garden in Confederation Park, downtown Ottawa. For more information on Winterlude 2013, visit winterlude.gc.ca. To find out more about the contributions of Canadian men and women during the Korean War, visit veterans.gc.ca.

Email ThisBlogThis!Share to TwitterShare to FacebookShare to Pinterest
Labels: Year of the Korean War Veteran