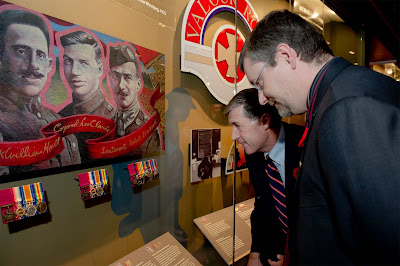 This collection was completed with the recent acquisition of the medal awarded in 1915 to Company Sergeant Major Frederick William Hall. The War Museum acquired the Valour Road Victoria Crosses of Lieutenant Robert Shankland and Corporal Lionel B. Clarke in 2009 and 2010 respectively.

Only 96 Victoria Crosses were awarded to Canadians in the medal's 156-year history, making this coincidence truly exceptional. With the acquisition of the Hall Victoria Cross, the Canadian War Museum now has 33 Victoria Crosses in its collection, including one from the nineteenth century, 28 from the First World War and four from the Second World War.

"Valour Road is remarkable for its association with three recipients of this renowned award for bravery. The three men were honoured for their heroic acts in different battles and in different years, but all were from a single block of the same residential street," said Mark O'Neill, President and CEO of the Canadian Museum of Civilization Corporation, which operates the Canadian War Museum. "These medals belong together and so they shall remain in perpetuity, held in the name of all Canadians."

The trio of medals will remain on permanent display in the Royal Canadian Legion Hall of Honour. In 2014, this famous trio of Victoria Cross Medals will be loaned to the Manitoba Museum in Winnipeg for a special exhibition commemorating the role of the Winnipeg Rifles and Queen's Own Cameron Highlanders regiments during the First World War.

"Our Government is very proud to see this extraordinary story displayed in the War Museum's collection and shared with other museums and institutions across the country," said Minister Moore. "On the road to Canada's 150th birthday in 2017, let us continue to celebrate all of the things that make Canada the united, prosperous, and free country we are today."

The Victoria Cross was introduced during the reign of Queen Victoria and remains the highest award for military valour in Britain and much of the Commonwealth including Canada, which created its own version of the Victoria Cross in 1993.

The Victoria Cross is awarded

"for the most conspicuous bravery, a daring or pre-eminent act of valour or self-sacrifice or extreme devotion to duty, in the presence of the enemy."

Company Sergeant Major Frederick William Hall received the medal for his actions during the 2nd Battle of Ypres, infamous as the site of the first German gas attack on the western front. Hall was shot in the forehead and killed during a prolonged and valiant attempt to rescue a wounded comrade. The posthumous award was presented to his mother. Corporal Clarke received his medal for valour in the face of the enemy at the Somme Front on September 9, 1916, while Lieutenant Shankland received his Victoria Cross for actions during the Battle of Passchendaele in October 1917. 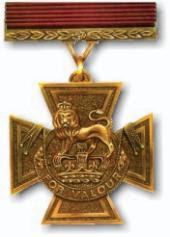 The Victoria Cross and the Heroes of Valour Road

The Victoria Cross was instituted on February 5, 1856 with the first awards given to heroes of the Crimean War (1854-1856). It is the British Commonwealth's highest award for military bravery.

The issue of the Victoria Cross to Canadians was discontinued when Canada instituted its own awards for bravery and gallantry during the late 1960s and early 1970s. However, a uniquely Canadian version of the Victoria Cross was introduced in 1993, again becoming Canada's highest award for bravery in the face of the enemy. It is identical to the earlier British award except the words For Valour are replaced by the Latin Pro Valore. The Canadian Victoria Cross has yet to be awarded.

The Heroes of Valour Road

Of the 70 Victoria Crosses awarded to Canadians during the First World War, three went to residents of a single block of one residential street: the 700 block of Pine Street in Winnipeg. In recognition of their gallantry, the city changed the name of the street to Valour Road in 1925.

The men were different ages, served in different military units, and were recognized for heroism in different battles. The nature of their pre-war connections—if any—are unknown. But the coincidence of having so many Victoria Crosses associated with a single street is unique in the world.

Hall was born in Kilkenny, Ireland, in 1885. A veteran of the British Army, he immigrated to Canada with other members of his family a few years before the outbreak of the First World War. He worked as a shipping clerk in Winnipeg and then enlisted in the 8th Canadian Infantry Battalion in September 1914.

Seven months later, the Battalion was at the western front helping to defend the Ypres Salient, a bulge pushing into the German lines around the city of Ypres, Belgium. The Salient guarded an important communication crossroads and access to the channel ports of Calais and Dunkirk.

On April 22, 1915, the Battalion was among the Allied defenders enveloped by the first use of poison gas on the western front. The Germans attacked again the next night with artillery and another release of chlorine gas. Hall's company was ordered to leave its trench and move to another, exposing the men to enemy fire as they crossed a raised bank. After arriving at the new location, Company Sergeant Major Hall determined that two of the men under his command were missing. He left the trench, found both wounded men in the darkness, and brought them back to safety.

The next morning, on April 24, he heard the groans and cries of another wounded man and organized a rescue party with two volunteers from his company. Both volunteers were wounded in the attempt, and Hall pulled them back to safety. He then decided to try again on his own. With bullets hitting the ground around him, he made his way to the wounded soldier. As he was attempting to lift the man, Hall was hit in the forehead by an enemy bullet and killed. The soldier he was attempting to save was also shot to death.

For his heroic deeds, Hall was recommended for the Victoria Cross. The medal was presented to his mother, Mrs. Mary Ann Hall, who was then living in Winnipeg with Fredrick's two sisters.

Clarke was born in Waterdown, Ontario, in 1892, but his family eventually settled in Winnipeg. He was a railroad surveyor in Saskatchewan when the First World War began, and he returned to Winnipeg to enlist in the 27th Battalion. He later transferred to the 2nd Battalion, 1st Canadian Division to be with his brother Charles.

Leo Clarke volunteered for a bombing platoon, whose members were trained in the use and tactics of hand-grenades. Working with bayonet men, their task was to clear enemy trenches in close quarter combat. On September 9, 1916, Corporal Clarke and his platoon were at the Somme Front. Their objective was to clear a section of enemy trench, then build an earth and sandbag barrier to prevent a counterattack. Clarke led a small group of men down a section of the trenchline while the other Canadians began building the barrier. The fighting was so fierce for Clarke's group that all of his comrades were soon dead or injured. About 20 German soldiers, led by two officers, began a counterattack. Clarke built and defended his own hasty barrier. When the fighting stopped, Clarke had been bayoneted in the leg, but had killed or captured all of his attackers.

For that valour in the face of the enemy, Clarke earned the Victoria Cross. Sadly, he did not live to receive the decoration. Almost two months after his remarkable display of heroism, he was killed by enemy shellfire. The medal was presented posthumously to his father during a ceremony in Winnipeg.

Born in Ayr, Scotland, in 1887, Robert Shankland moved to Canada in 1910 and found work as a cashier at a Winnipeg creamery. He enlisted in the 43rd Canadian Infantry Battalion (Cameron Highlanders of Canada) in December 1914.

Shankland received the Victoria Cross for his actions during the Battle of Passchendaele in October 1917. At the time, he was a Lieutenant in the 43rd Battalion. On the morning of October 26, the opening day of the battle, Shankland led his platoon of men from D Company to the crest of a hill overlooking the enemy trenches at Bellevue Spur. To his right were elements of the 58th Battalion and to his left were troops from the 8th Brigade.

When the Canadians moved forward, B Company of the 43rd Battalion captured Bellevue Spur, but heavy enemy fire caused the 58th to retire, leaving Shankland and his platoon from D Company exposed on the right flank. Eventually, the left flank retired, further exposing Shankland's troops. They were subjected to enemy fire and a counter-attack, suffering heavy casualties for four hours. Recognizing the desperate need for reinforcements, Shankland made the perilous journey back to Battalion headquarters where he provided a detailed report of the situation and a plan to counter-attack. He then returned to his men, who were soon successfully reinforced by soldiers from the 52nd and 58th battalions. For his actions that day Robert Shankland was awarded the Victoria Cross for his leadership and courage.

Shankland was the only one of the three Valour Road Victoria Cross recipients to survive the war.