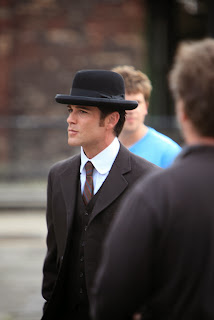 GUELPH, Ontario November 15, 2013 An upcoming episode of the CBC hit television programme “Murdoch Mysteries,” was filmed in downtown Guelph today. Production shut down Douglas Street and the exterior of County’s Child Care office was the central location for the shoot. The heritage building was used as a 1900’s piano store. The television crew transformed Douglas Street into a busy marketplace.

“To be a top choice for location filming is more than an honour, it’s an economic contribution,” said Jana Reichert, County Economic Development Officer. “Crews shop and eat locally, bringing business to the community.

Wellington County has many diverse shooting options for production companies. We welcome future partnerships with the entertainment industry.”

“Murdoch Mysteries” is a Canadian drama television series, featuring Yannick Bisson as William Murdoch, a police detective working in Toronto in the early 1900’s. The television series is based on the series of novels by Maureen Jennings.

“The County would like to thank the production team at “Murdoch Mysteries,” commented Andrea Ravensdale, County Communications Manager. “Filming did not affect County business and this experience was positive for both parties. The County would welcome the opportunity to work together again.”

This episode of “Murdoch Mysteries will air on CBC in February.