Canada Remembers the Liberation of the Netherlands 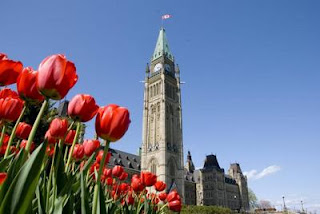 OTTAWA, May 3, 2013 /Canada NewsWire/ - The Honourable Steven Blaney, Minister of Veterans Affairs and Minister for La Francophonie, issued the following statement today regarding the 68th anniversary of the Liberation of the Netherlands.

"The struggle to liberate the Netherlands was an important chapter in the events leading to victory in Europe and the end of the Second World War. Canada's vital contributions helped lay the foundation for a strong relationship between our two countries that we continue to enjoy today.

Many Canadians serving overseas during the Second World War played a role in the Liberation of the Netherlands. Over nine long and grueling months, more than 7,600 Canadians gave their lives to help bring freedom and peace to this country.

In honour of their gift of freedom, the Dutch people have donated tulip bulbs to Canada annually since the end of the Second World War. In Ottawa, we see this symbol of our enduring connection as the tulips bloom each spring.

Even though the cost of lives was heavy and the sacrifice great, Canadians take pride in the role they played as liberators. We remember, with everlasting gratitude, the contributions of all who served and those who made the supreme sacrifice. Lest we forget."

For more information on Canada's contribution to the Liberation of the Netherlands, visit the Veterans Affairs Canada website at veterans.gc.ca.

2013 is the Year of the Korean War Veteran—Canada proudly remembers the heroes of the Korean War and their brave fight to uphold freedom, democracy and the rule of law. For more information on Canada's role in the Korean War, visit veterans.gc.ca, visit our Facebook "Canada Remembers" page to leave a message of remembrance or follow us on Twitter @VeteransENG_CA.