Canadian Government Invests in War of 1812 Commemoration in Hamilton 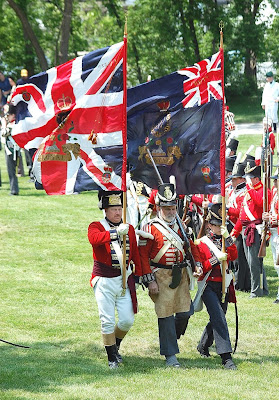 HAMILTON, Ontario, July 24, 2012 /Canada NewsWire/ - Thanks to an investment from the Government of Canada, the City of Hamilton will have the opportunity to hold War of 1812 commemorative activities that will pay tribute to the city's heritage and boost local tourism. This was announced today by David Sweet, Member of Parliament (Ancaster-Dundas-Flamborough-Westdale), on behalf of the Honourable James Moore, Minister of Canadian Heritage and Official Languages.

With this support, the City of Hamilton plans to commemorate the soldiers who fell during the Battle of Stoney Creek. The City will re-inter the remains that were discovered on municipal lands into a crypt at the Smith's Knoll Battlefield Cemetery, and the surrounding grounds will be landscaped to include interpretive stone pathways. Once this is complete, the City will host a commemorative event to honour these soldiers and give them a proper burial.

"Canada as we know it today would not exist had the British troops, Canadian militia, and First Nations and Métis allies not joined together to defend our borders," said Minister Moore. "The 200th anniversary of their fight for Canada is an unprecedented opportunity for all Canadians to learn more about this important part of our past and to take part in many of the activities and events that will pay tribute to these heroes."

"We are proud to help commemorate the defining moments in our history—including the history that took place in our own backyard with the Battle of Stoney Creek—and to tell the story of the Canada we know today," said Mr. Sweet. "I invite everyone from the Hamilton area and from across Ontario to join us in commemorating the heroic efforts of our ancestors."

"Smith's Knoll was the site of the most desperate fighting during the Battle of Stoney Creek in 1813. It is fitting that this is the site where we commemorate those who fell in the battle and where we remember the horror of war and the value of peace," said Anna Bradford, Director of the Tourism and Culture Division, City of Hamilton. "We thank the Government of Canada for their support of this project."

The Government of Canada has provided funding of $130,300 over two years through Canadian Heritage's War of 1812 Commemoration Fund. The Fund supports community-based projects to foster greater awareness and understanding of the importance of this conflict.